What Do Greek Olives Taste Like? Revelations in the Peloponnese

“Here,” the man said, walking over to some waist high earthenware jars, “you should try these.” He lifted the dinner plate sized lid, revealing dark purple olives glistening in brine. He took a ladle and scooped up four or five olives. “Take one,” he directed, holding the ladle out to us. I picked out one, the size of my thumbnail and put it on my tongue.

Biting into a plump Kalamata olive, grown just a few kilometers from where we stood in a rustic wood planked shop in a small seaside town in the Peloponnese was almost a religious experience for me. The skin was still taut, having been picked just a few months earlier, and the first taste was of the sweet seawater it had been stored in since then. But as my teeth pierced through to the firm flesh, I felt as though I could taste the sun and the wind and the earth and the rain that enabled it to grow. It tasted as if drew both from the sea below and the mountains above. It was tangy and salty and earthy and absolutely delicious. I rolled the small pit around in my mouth until it was clean of its flesh and then slipped it into my palm.

A few days before I left for Greece—a vacation with my mom and 13-year-old niece—I went to play a doubles squash match at my club. Another game was finishing up, so I sat on the bench outside the court and chatted with another player, a gentleman a bit older than I. When I mentioned I was leaving for Athens that weekend, he enthusiastically filled me in on his travels there and how much he and his wife enjoyed the food.

“I’m looking forward to eating olives,” I told him.

Many varieties of Greek olives at a market in Athens

“Not even Greek olives?” I asked him, adding that I hadn’t thought I liked olives until my parents visited Greece years ago and started bringing home Kalamata olives from a market near where we lived in New England. Occasionally, my father would pull from the container a dark purple olive  that was still attached to its stem, and sometimes to a leaf or, even better, to another olive. He’d offer it my mother, who would look at both the olive and him adoringly.

“I didn’t try them,” the man confessed. “What do they taste like?”

I was both incredulous and stumped. What DO Greek olives taste like? There’s really no other food I could compare them to. I think I finally told him to go to a place like Sahadi’s or Whole Foods which have the Kalamatas, as well as many other kinds to try, and not the ones stuffed with a pimento and tasting like swamp water.

But here’s the thing, I should’ve told him to return to Greece.

Overlooking Kardimyli and the Messenian Bay

About a week later, my mother, niece, and I were zipping in our rental car through the actual city of Kalamata, on our way to a small town on the western coast of the Mani peninsula in the Peloponnese. On the outskirts of the city, the road narrowed and began climbing and soon I was shifting gears to round the hairpin turns, and the commercial buildings of the city faded into the cottages and farmhouses tucked into steep countryside leading upward and beyond to snow-capped mountains. With the sea glistening off to our right, it was breathtakingly picturesque. Countless hilly twists and turns later, the vista opened and we were looking out toward the sea again and a town way below nestled along on its coast. Kardamyli. 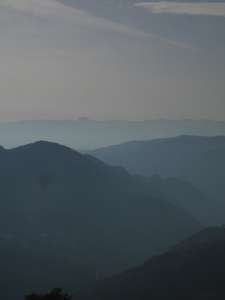 Mountains of my dreams in the Peloponnese

I grew up in a coastal town in New England, so the ocean is not only appealing, it’s nostalgic. The scent of briny sea air, the ever changing texture of the water and waves, the many sounds it makes over rocks and sand is deep in some part of me. But as much as I love the ocean, I’ve always been drawn to the hills and mountains where fewer people can live but where one can hike and the land and sky curve and jostle into each other. As I looked down on little Kardamyli on the coast, my gaze drifted up to the hills behind it and then further to the steeper mountains. This was a town of my dreams.

It’s clearly already found its way into other people’s dreams, as Rick Steve’s guidebook on the Peloponnese will attest. Europeans from colder climes clearly enjoy its warm but rugged beauty. But on a late morning in mid-March, the small town square was quiet and there were plenty of places to park across from a patisserie and café where local men were sitting outside in the spring sun. By this point in our trip I knew what I wanted to do at 11 o’clock on a beautiful day in the Peloponnese before we did anything else – buy a slice of sweet baklava from the patisserie, order a strong Greek coffee from the café, and enjoy both at a table in the square. Really, what in life could possibly be better?

Lunch at Harilaos by the harbor

Possibly lunch on a deck at a restaurant overlooking the small harbor where we found ourselves a few hours later. Fried golden calamari with plenty of fresh squeezed lemon. A salad of chopped tomatoes, feta cheese, and capers over a large crouton softened by olive oil. – a kind of Greek bruschetta. Chickpeas with spinach. And a Mani specialty of pork and potatoes in a citrusy orange sauce. Along with a Mythos lager, it was a perfect seaside, mountains-in the-distance lunch.

While I’m not one for a lot of slow-walking sight-seeing, I’m glad my mom was paying attention to the guidebook that day. Mr. Steves suggested walking from one end of the small town to the other and stopping in a few local shops. With its old two and three-story buildings and townhouses running along the main street and toward the water, it reminded me of my New England hometown only faced with stone instead of clapboard. At the other end of town, we stopped at what looked like a fenced-in yard or shed. A hand-lettered sign at one end read: Bio-Organic Olive Oil — Local Manis. Inside, after our eyes adjusted to the dim light, I read another sign hanging over large bowls of olives: Sacred Area. If only, I thought later, my squash but not olive-eating friend had come here.

Yiannis and his olives

I think it would be impossible not to love an olive offered by Yiannis Dimitreas, the owner of the shop. A striking man just past middle age who looks like he came straight in from the olive groves or a brisk hike in the hills, Yiannis immediately engaged us with stories of the provenance of his wares (all local, some wild, most organic), as well as filling us in, when asked, on his history (a true Kardimylian, but with a long detour in Australia), his love of Greece, and his passion for the land. Somewhere along the way, he had picked up a key point in Marketing 101—make your customer fall for you and they will fall for what you’re selling. When I asked him which of his olives I should purchase, he said, ah, but you need to taste them. 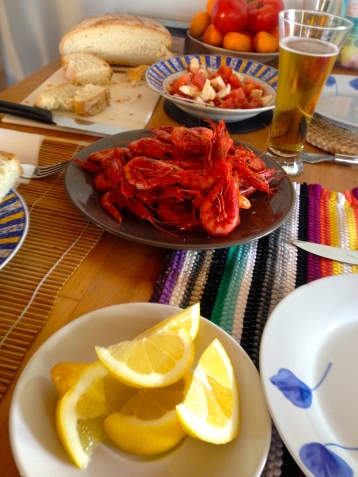 In the United States, it seems rare to be offered a taste of a food that someone’s grown, harvested, cooked or cured, and then sold all by the same person. Even farmer’s markets often have middle men. But obtaining food straight from or close to the person who’s helped create it is still a part of Greek life. The first morning we were in the Peloponnese, we accompanied the woman in whose house we were staying to the nearby village of Petalidi. We went to the butcher for meat, the fishmonger for fish, the bakery for bread, and only then to a tiny grocery store for vegetables that weren’t yet full-grown in her own plentiful garden. A few days later, in Kalamata, we went to most enormous outdoor market I’ve ever laid eyes on, and bought tangy goat yogurt, spiky artichokes, little mandarins, a kilo of bright red shrimp (heads on, as I prefer), and a kilo of locally made wine. Along with the feta, olives, and bread bought earlier, we put together one of the most delicious lunches in my memory. 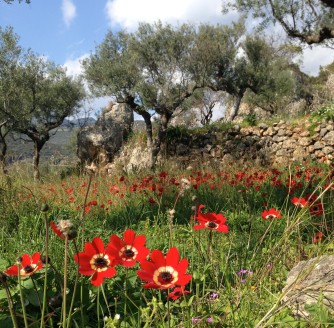 And yet, as memorable as that was, it is the taste of the olive in Yiannis’s shop that I think will remain strongest in my memory, and remind me the most of Greece. The afternoon we met Yiannis, we stopped in for a quick hello then took a hike up to see the fortressed stone buildings of Old Kardamyli. A cobblestone path took us through a grove of olive trees, its meadow sprinkled with spring wildflowers, including hundreds of little red poppies. The taste of an olive resembles nothing like the sight of a cheerful red poppy, but the pleasure was just as intense.

When we returned to the small shop, a woman was slicing lemons in half. As we watched, she and Yiannis squeezed lemon after lemon with their hands and the juice and pulp dripped through their fingers into a bowl of green olives. Glowing golden-green olive oil was then poured in a stream from a silver metal canister with a long spout. Lastly, Yiannis shook some small shrubby branches over the bowl and little leaves of throubi, a local herb similar to oregano, showered over the olives.

“These won’t be ready to eat for a few days,” he said, as we inhaled the tang of lemon and herbs, “but they’re my favorite.”

Of course, I bought a jar. And when I finish the last one, I will want to return to Greece for more.

If you’re planning a trip to Greece and want to have a more local experience, I would highly recommend Rick Steves’ guidebooks and website. Everything he suggested–in his friendly, good-humored, and informative way–we thoroughly enjoyed.

9 Responses to What Do Greek Olives Taste Like? Revelations in the Peloponnese