Facing Obama Arms & other Take-aways from the Tournament of Champions 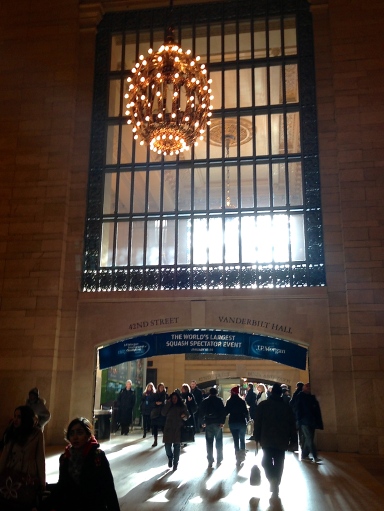 My legs ache. My butt is burning. I’m sucking air with every lunge forward. Squeak, squeak, squeak go my . . . skis. It’s squash week in NYC and I, in unforgivable ignorance of the squash calendar, scheduled a cross-country ski trip for the same weekend as the Grand Open and the early rounds of the J.P. Morgan Tournament of Champions in Grand Central—my favorite pro tournament of the year. Oops.

Fortunately, I was back in time for the ToC quarterfinals. As is often the case, I (an enthusiastic amateur) find some good take-aways, especially from the women.

– If your opponent is wearing a color that clashes with your own, they may do everything they can to keep you as far from them as possible. This I learned watching Rachael Grinham (AUS) lob every other ball she could over Joshana Chinappa’s (IND) head and into the back right corner, succeeding in getting Joshana’s salmon pink shirt as far as she possibly could (in a squash court) from her own pale pink one. As a bonus, Joshana wasn’t returning the ball back very well from that position and Rachael was gobbling up games. She had just taken the third game 10-4 and looked poised to swallow the fourth one fast, when I learned that….

– Players with rainbow-striped shoelaces make good volleyers. Or at least, ones wearing salmon pink, because all of a sudden, in the fourth game Joshana was not letting any (or barely any) of those high cross court lobs get by her. She cut off lob after lob, often giving Rachel a taste of her own back of court medicine. It was fun to see a player figure out the hand she was being dealt and then throw the same cards back in the next game. I’d like to say she won that one; at least it was much closer, as Joshana took an early and significant lead. But experience counts for a lot and Rachael dealt a new hand yet again, using her own very accurate ones to win six points in a row and taking the last game 11-8. It still might be helpful to buy new laces, or . . . 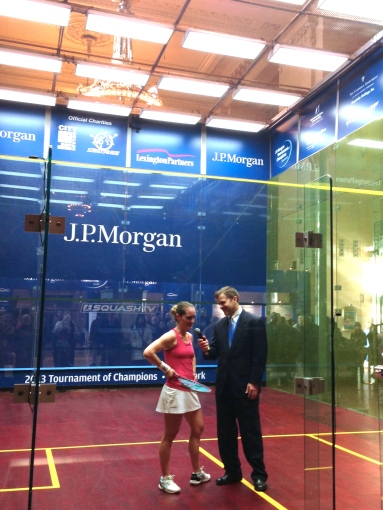 Natalie Grinham after semifinal win with Will Carlin

– Change your name to Grinham. Natalie Grinham (NED) got on court right after her sister’s match to play Sarah Kippax (ENG), and the sisters have similar game plans. Lose the first game. Win the rest. It’s not that Kippax (or Chinappa doesn’t play well; it’s more that the Grinham girls play with more patience. It truly doesn’t seem to bother them to lose the first game, as if they’re testing the waters. Then they use what they’ve learned to swamp their opponents. But here’s my question…. who will do the swamping tonight, when it’s Grinham against Grinham?? Because . . .

– One may face Michelle Obama. I mean her arms. I mean arms like Ms. Obama’s, but on Ms. Brown. Oh, you know what I mean. I’m sure plenty has already been written about Kasey Brown’s amazing physique, but like Michelle Obama’s arms, I can’t help but be entranced by it. Even when a superb player like Amanda Sobhy (USA) is also on the court. And Sobhy seemed to be playing just as fast and as furiously as Brown (AUS), keeping up with her pace without much problem. She may not be as obviously buff as Brown, but it’s all there. The games were incredibly close, with the second and third going into extra points, so the 3-0 match to Brown doesn’t say it all. Sobhy will be back soon, but in the meantime (today, in fact) Brown’s arms will take on Madeline Perry’s [IRL], whose winning quarter-final match, I am ashamed to say, I couldn’t stay awake for, because my arms were too tired from all that cross-country skiing. I’m setting my iPhone calendar now to remind me to check the 2014 ToC schedule on the PSA site before I do any scheduling of my own. Just imagine what we might learn next year….

The Tournament of Champions continues in Grand Central through January 24th. Ticket info here. Or watch on the excellent SquashTV.