I heard an absolutely amazing story the other day. A friend had told me about it after we had played a few hours of doubles squash and I was wringing out my sweatbands and trying to muster the energy to walk to the locker room. The story was about two women. The first one owned something very valuable, even priceless. And the second woman wanted it very badly. She had the opportunity to take it—completely legally, this isn’t a tale of crime—but in order to do so, she had to be smarter and more tenacious than the first one. Could she do it?? 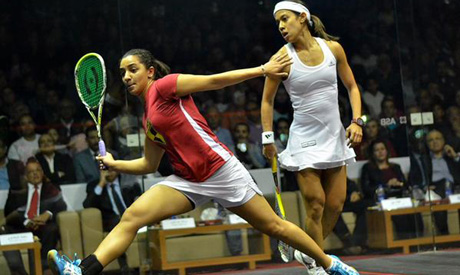 I love stories like this one. Especially about women. Especially about squash. The story had already been told a few weeks earlier, a few thousand miles away in Cairo, Egypt at the Women’s World Championship Final. However, I might be able to find it online, my friend said, on Squash TV. A few hours later, I tapped the full screen tab and there they were, World #1 Nicol David and World #2 Raneem El Welily in the flesh. Well, in pixelated flesh.

Everyone who pays even a smidge of attention to pro squash knows that Nicol David is the Steffi Graf of squash. The reigning queen for eight years, with seven world titles to her name (this would be her eighth, if she prevailed), I’ve seen her play a few times and she just exudes confidence—not the flashy kind, but the calm and cool kind. Want to learn from a master? Watch Nicol David.

As for Raneem El Welily, I’d heard about her prowess more than seen it. Friends kept telling me about amazing matches they’d witnessed, but I’ve always seemed to have missed her. However, I knew she was someone Nicol had to watch out for—one of the grittily determined and fiercely physical Egyptians who were all but ready to clamber up Nicol’s throne and take the crown for themselves. So when Raneem strode onto the court to the din of her countrymen’s cheers, I knew this story would be good. I just didn’t know how good.

What makes for a good beginning is that it starts out unexpected and makes you take immediate notice. I was expecting Nicol to start strong; she’s World Number One after all. She’s Ms. Calm-Cool-and-Collected. But Raneem owned that title in the first game. She was Ms. Chill, and her flicks of her racquet made Nicol run and stretch and leap from one end of the court to the other. While Raneem’s rails clung close to the wall, Nicol’s kept popping out wide and onto Raneem’s ready racquet. I know that everyone gets nervous, but I really hadn’t seen Nicol so unsettled before. When Raneem won the first game a solid 11-5, I thought that this would be one short story.

Obviously, the two commentators on Squash TV thought so, too. When Raneem put one away from (what looked like to me) a racquet behind her back, my jaw dropped and one of the commentators confirmed my thoughts: ‘Nicol is being dismantled.’ Admittedly, I was loving it. I greatly admire Nicol, but who doesn’t love an underdog? And then Mr. Plot Spoiler (sorry, 2nd commentator) had to interject, “it can change quickly, too, Paul.”

More accurately, Nicol began to change. From being down 2-6 in the second game, she gradually regained her composure and accuracy and began making Raneem do the running. Soon she’d evened it up to 7-7, then slowly, patiently, took the lead and won the game with an awarded stroke point.

Nicol David stretching for the ball.

Who knows what players think between games, but as game three got under way it definitely appeared as if Raneem had decided to take over the narration. Nicol wasn’t letting her have every word, but after trading points to 4-4, Raneem’s expert drops and boasts were getting all the attention. With two amazing serves that were virtually unreturnable, Raneem took the third game 11-7 to the cheers of an excited Egyptian crowd.

Oh, and in case you forgot, Raneem is Egyptian. This is her country. Winning a World Championship for her in Cairo is like Andy Murray winning at Wimbledon. It’s huge. Keeping calm until this point is one thing, but now with only one game between her and a fairytale ending . . . well, when does that start to seep in?

Not yet. And not at 3-2, 4-2, 5-2, 6-2 . . . Raneem seemed to be playing the first game all over again. “How is Nicol going to respond to this?” asked the commentator. As if on cue, Nicol got the next four points in a row. As badly as Raneem must’ve wanted this game and this match, Nicol wasn’t going to make it easy. She covered the court as if she had springs for legs…and she probably does. According to my badly scrawled notes, “Raneem is getting tighter” and “Nicol is just frowsing.” Do not ask what ‘frowsing’ is; I do not know. But it worked. She froused her way to 6-6, before Raneem un-froused her with a gorgeous corner drop. And then Raneem proceeded to take the next four points with the patience of a cat stalking a particularly tricky mouse. She waits, waits, waits . . . waits . . . and pounces. With one straight drive after another that even Nicol’s springs couldn’t reach.

Have you done the math? Do you see a pattern here? Do you want to know what happens next? If you’d rather see it—and I wouldn’t blame you; it’s mind-bending to watch—stop reading now and go here.
For you lovers of this literary squash boiler, here is what happened.

It’s 10-6 and the commentators are practically hollering “Four Match Balls! Four Match Balls!” They are giddy. As is the crowd outside the court. I find myself speaking to the screen, as if this is live in front of me. “Keep calm, Raneem. Keep. Calm.”

Do you see where this story is going? If Raneem had won any of the next four points, it would have been amazing for her. Friggin’ fantastic. But it wouldn’t have been the greatest story. Well, to me, anyway. I would’ve been very, very happy for Raneem. But I wouldn’t need to tell the story. So . . . no, Raneem doesn’t win any of those match balls. It’s pretty excruciating. But as for Nicol, she becomes Super Nicol, Nicol with wings for legs and racquets for arms. And maybe a third or fourth eye. In the world that was, the one in the first few games, Raneem had a chance. A great chance. But Nicol has created a new world order in this glass court in Cairo and she can’t lose.

This story pretty much ends here for me. The fourth game is definitely the climax, and the reason why I needed to tell it, even though time has passed. Despite the commentators futilely asserting that Raneem could still win it at the start of game five, the air seems sucked away. How could Raneem not feel deflated? Frustrated? She hangs on well for the first few points, 1-1, 2-2, 3-3, but after that, it’s Nicol’s game. She isn’t necessarily better technically than Raneem, but her tenacity is untouchable. It could be experience. Training. Coaching. But in the end, in the game, it’s all Nicol. I may be sad for Raneem, but Nicol has turned this match into an amazing comeback tale. She wins the 5th 11-5. I am truly in awe.

But what’s just as awesome is that we (I mean, New Yorker ‘we’) can watch Nicol and Raneem, and many of the other pro women players in the WSA at the J. P. Morgan Chase Tournament of Champions in Grand Central this week! Who knows, maybe Nicol and Raneem will meet again in the finals. But one thing is for sure, it’ll be a different story.