sweating it out at streetsquash 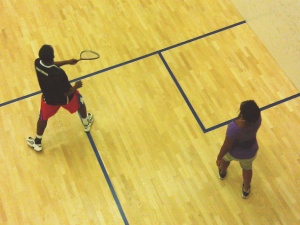 Beads of water form and gather on my arms and no matter how many times I wipe the handle of my racquet with my skirt, it’s still slick. Remembering the a/c challenged courts from last year’s round robin, I’ve come prepared with three bandanas, two wristbands, and a towel, but they can’t keep up with my body’s insistence to drench itself. It doesn’t care that I’m playing one of the most significant games of my life. I’m on a roll and I’m about to take him down. I’m serving well into the back corners, getting him on the defense, and then putting every loose ball away. It’s 8-3, 9-3, 10-3, 10-4 . . . and then he goes for a drop and tins it. I’ve just beaten my brother. 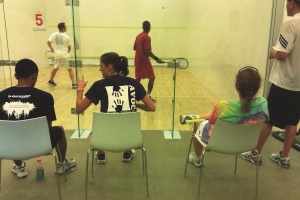 This was only one of the dozen or so games I played up at StreetSquash last night, during the summer round robin jointly run by New York Squash (MSRA to us old folk) and StreetSquash. It’s the third year they’ve run it and $20 buys anyone with a racquet and a decent game, two plus hours of squash, soft and/or hoppy drinks, and greasy but decent pizza at the end of the evening. This past Tuesday, there must have been at least three dozen players, but with eight courts and two games per match-up, you get on the court quite a lot. And the organizers try to match you up with someone on your level, although part of the fun of an RR is playing a variety of players, including some awesome StreetSquash students. 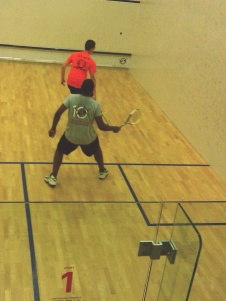 I basically forgot how to play when paired up with a long-limbed, recent college grad with crisp, hard rails, but once I remembered this was supposed to be fun, I calmed down and brought my game up a few notches.  Although I had to laugh when she suggested segueing immediately into our second game and I had to point out that someone old enough to be her mother must retire to her rocker for a moment to recover. Soon after, I ran around with a guy much closer to my years and we huffed and puffed companionably. My last games of the evening were with an enthusiastic new-ish player from NYSC; while I took the two games without much difficulty, I suspected that it wouldn’t be long before the tables would turn. He had the squash bug. I know it well. 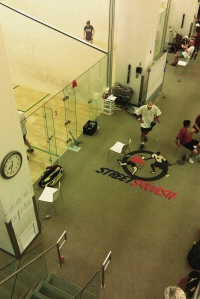 end of the evening

What I also love about this city-wide RR is that it breaks me out of my squash routine. I adore my squash peeps out at CityView, but it’s great to see new and vaguely familiar faces from the rest of our fair squash city and test out some new opponents. And it’s yet another reminder of why I love this game—the people are great. Well, at least the ones trekking to West 115th Street this summer. So if you’re looking for a worthwhile diversion for a few hours and don’t mind losing a few pounds of water, come on up one Tuesday (details here). Just don’t forget a towel . . . and go easy on my brother.