A Night of Frustration, Exhaustion, Surprise, and Predictability 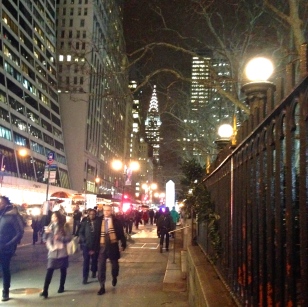 42nd Street on a Winter’s Night

New York in winter. West Village wood smoke in the cold air. A steaming slice of John’s pizza burning your tongue. The white lights of the Chrysler building shining more beautiful than any constellation. It is supposed to be snowing, but instead the Bryant Park skaters will have to do without the added atmosphere. And in Vanderbilt Hall, where four glass walls gleam under a grand chandelier, no one cares about snow. They’ve come to watch squash, and talk squash, with friends who play squash. They don’t care about snow. 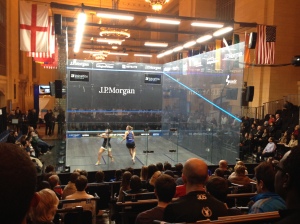 The women’s quarter finals of the J. P. Morgan Tournament of Champions are frustrating and exhausting, predictable and surprising. At lunchtime, I get frustration. Along with a dose of exhaustion. Camille Serme (FRA, rank 6)) goes quickly up two games against Laura Massaro (ENG, rank 3) 11-3, 11-4 with her aggressive volleys that keep Massaro scrambling and just a step behind. By the end of the second game, I’m already writing her off. But the wind changes and Massaro shows that she’s not seeded 2nd for nothing. She finds another gear, or Serme loses a bit of hers, and the two begin tripping over one another. Lets are sprinkled around like pine needles under a dried out Christmas tree, despite the refs telling them repeatedly to clean up their act. Massaro gets the third, fourth, and fifth games in similar fashion and score, all 11-7. 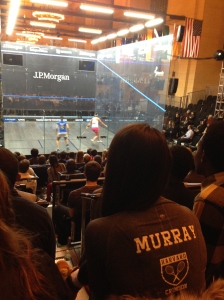 Despite the cheering squad of Amanda Sobhy’s college teammates and friends seated right in front of me, her match against Raneem El Welily (EGY, rank 2) is fairly predictable. I think Sobhy (US, rank 11) is happy to be here (in the quarters), but El Welily makes clear that she won’t be here for long. She gifts Sobhy the third game, but otherwise, her control, sharp shots, and amazing reflexes give El Welily a decisive win at 11-5, 11-5, (2-11 — yeah, weird, huh?) and 11-4.

A few hours later, I’m back just in time to catch the last few points of the Nour vs. Nour 4th game. Or, to keep it straight, El Tayeb vs. El Sherbini. It’s New York Squash’s Ladies Night and I’m greeting my fellow ladies, when I look up at the screen above the bar and realize that El Sherbini has a match point. I blink, and El Tayeb has game point! She ties up the games with 14-12. And, even better, I get to watch their final game.

If this 5th game is indicative of what came before, I’m guessing that I missed the best and tightest match of women’s quarters. El Sherbini tries to stop the bleeding that began in the fourth game and is all business until 7-3, but El Tayeb isn’t one to just roll over. She battles back to within a point and keeps coming until El Sherbini grits her teeth and volleys, drops, and drives her way to the win at 11-9. So, points for exhaustion and determination.

Surprising is the word for the Nicol David (Malaysia, rank 1) and Alison Waters (ENG, rank 5) match. After watching and writing about David’s focused come-from-behind win over Raneem El Welily in Cairo last month, I had already moved her into the semis in my mind. And not-so-secretly hoping for a rematch between her and Raneem in the finals. But Waters wasn’t reading my script.

Waters patiently waited and pushed just hard enough for David to make the errors. And she did . . . just enough to lose the first game to Waters, 11-9.

And then in the third, Waters ditched her patience and decided to just go for it. She rammed the ball back into the furthest corners and controlled the T with a vengeance, racking up points to 9-2. David dug in to get her score up to 7, but Waters had found the right tactics. Keep the ball tight and deep. Time after time, she put it deep into the back left corner and David just couldn’t dig it out. 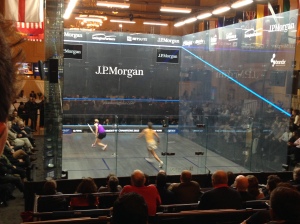 Waters winning match point against David in the 4th game

I don’t think I’ve personally witnessed Nicol David run out of steam before, but it happened in game four. Was she feeling under the weather? Not acclimated to winter, or perhaps that drifting woodsmoke? Whatever it was, she certainly wasn’t her fleet-footed self. Waters ran all the way to seven without one point for David, and then after letting her serve once, went straight to match point and then the win, 11-1. I felt badly for David, but Waters was far and above the better player in this match.

I’m looking forward to both semi final women’s matches on Thursday — starting at 5 p.m! Englishwomen vs. Egyptianwomen. I won’t predict anything this time. Anything could happen. It might even snow.

5 Responses to A Night of Frustration, Exhaustion, Surprise, and Predictability