That isn’t a quote from any of the excellent players I watched Wednesday evening at the Tournament of Champions semi-finals. Rather, it’s from a rather poignant article in this week’s New Yorker about the author’s love of squash and his frustration with age affecting his game. Well, the line could’ve also come from another and much better known player affected by age, Nicol David. I watched her surprisingly quick demise, thanks to the almost magical shot-making by Nour El Sherbini, an Egyptian player twelve years her junior. Nicol displayed flashes of her trademark brilliance (her leaps around the court seem gravity defying) but I couldn’t help noticing a certain stiffness in her walk between points. Both she and Sherbini had battled five games the night before in their respective quarter final matches, but recovery for a twenty-year old is a very different cup of Advil than for a thirty-two year old. Nicol lost in three. 11-8, 11-5, 11-6.

The match most of the crowd had come for, however, did not disappoint. Although the match score was the same, at 3-0, the games were nail-biters, and my palms were sweating throughout.

American Amanda Sobhy bounded onto the court with a big smile. This may be the best week of her life so far – upsetting last year’s ToC champion, Raneem El Welily, and then trouncing last year’s finalist, Alison Waters, in three games in the quarters. She was flying high . . . so I wasn’t completely surprised when it took her a while to come back down to earth and get into the game with Nouran Gohar. Gohar had taken a little longer with her win against Laura Massaro, but she had proved to be both a patient and powerful player. Like other Egyptians, she could wield her racquet like a sword, so Sobhy was advised to wake up and watch out.

Fortunately for Sobhy, Gohar was still getting into the groove herself and more than a few of the first game’s early points were due to balls meandering around the court. But by mid-game, both players were beginning to shake off the shock of being in the semis and settle down. Gohar seemed to settle first, and put together a series of drops and cross-courts that kept her ahead by a few points. While I knew it was early on, I had to wonder if Sobhy was up to the standard of Gohar’s finesse and power. I hadn’t witnessed Sobhy’s slaying of El Welily (thanks to a truly terrible case of Downton Abbey addiction), so all I was going on was her Waters win, and that was, how shall I put it, a bit more English than this. 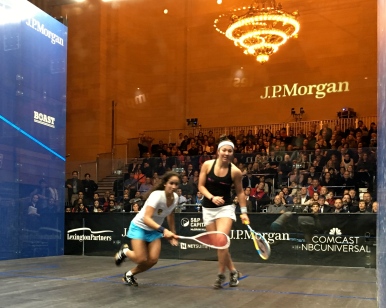 At 9-6, it looked like the game would go Gohar’s way. But then Sobhy slid the ball so close to the wall that Gohar couldn’t get any strings on it. And then a few moments later, Gohar put the ball up and out of court while hitting a cross court lob. Sobhy began moving Gohar much more noticeably around the court, and picked up another point to tie the game at 9-9. Then Gohar was denied a let, and Sobhy leapt to game point. She got it with a stroke point. 11-9 for Sobhy. I was impressed by her tenacity.

In game two, Sobhy came out strong. I couldn’t see her being coached on the sidelines between games as I did the day before, but I was guessing that she was again soaking in the advice of her coach, Thierry Lincou. She must’ve done as she was told. Within minutes, she was up by three, thanks to a reverse corner and a few lovely drops. Gohar executed a perfect pass down the right wall and Sobhy’s backhand missed it completely. But she didn’t miss hitting a volley that got past Gohar. And Gohar missed a few more, to give Sobhy a three point lead at 6-3 and again at 7-4.

I should know by now, not to give the game away too soon. These women are both known for not giving up. And Gohar is definitely not. She makes a winning cross court drop, then wrong foots Sobhy on a rail. They’re moving each other around the court, just waiting for the right moment. And both are getting their chance, tying it up at 8-8. Sobhy drops into the corner for 9-8, and then buries the ball in the back right corner for game point.

It’s not to be. Gohar hits a tight rail for 9-10. I realize then that my palms are slick and my boots keep tapping. I can’t help myself; I want hometown ‘Sobes’ to win the game. She does. 11-9. Whew.

I’ve dried my hands in time for game three. And this time, it’s Gohar who starts out strong, with a hair-above-the-tin drop and some slips and missteps my Sobhy. Gohar maintains a two to three point lead to all the way to 9-6. But this time, I’m ready for anything. And the first anything is a beautiful little drop by Sobhy. The second is a stroke point for Sobhy. And the third is a trip by Gohar in the back left corner. It’s 9-9, and Sobhy isn’t done yet; she slips in a corner drop for 10-9. Match point.

Of course, in this match nothing is that simple. Gohar hits a lovely cross-court that stays low, too low for Sobhy. So it’s tied at 10-10. Two points to win. On the next point, Sobhy holds her racquet and wrong foots Gohar. 11-10. Second match point. And this time it’s delivered, with a stroke to Sobhy. Video review confirms it. Amanda Sobhy, first American woman, ever, to make it to the ToC finals. Hello history books!

The twenty-two year old American will face the twenty-year old Egyptian. With both winning in three, they should be fairly fresh for the final. Age will not be in play.

Both men’s and women’s ToC finals will be played in Vanderbilt Hall in Grand Central on Thursday evening 1/14/16, starting at 7 p.m. More info here.

This entry was posted in squash, Tournament of Champions. Bookmark the permalink.