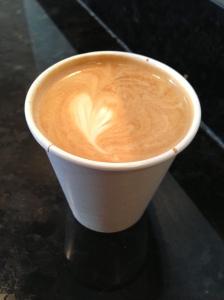 My latte was $4.05. The strawberry peach bar was $2.25. I have blown my daily food budget allotment in one visit to THINK coffee. The steamed milk decoratively poured into three shots of espresso tastes amazing on this winter afternoon, but now when I shell out my four plus bucks, I can’t help but think of how I spent the same amount for a day’s worth of food a few weeks ago. And how thousands of people continue to do so as part of the USDA’s SNAP (Supplemental Nutrition Assistance Program).

Many friends asked me after my ‘seven day trial’  on the SNAP/Food Stamp challenge what it was like, what I learned, how it will or won’t affect me going forward. (To read why I took the challenge and about my first two days, see previous posts: SNAP is not a game and This City Smells.) Honestly, I was torn about doing it to begin with, as I wasn’t completely confident of my motivation. Writing about an experience cuts two ways; you want to share something meaningful, but you also want to write about something people want to read – which in this case felt uncomfortably like I was ‘playing’ at being poor. It’s hard to get around that. But in some ways, hard times are closer than I’d like to think. Given that many jobs and homes have been lost in this economy, and more recently in Hurricane Sandy, people not  unlike me have not only had to tighten their budgets but turn to Uncle Sam for some assistance. If my home was just a few blocks closer to the water, I would be turning that way, too.

Ultimately, I’m very glad I decided to spend those seven days on a SNAP budget ($33.29 in NYC for the week). You certainly can’t do this with every issue or subject you want to learn about in life, but when you’re wandering around the city hungry because you didn’t pack enough snacks for the day, you definitely feel much more empathy for anyone asking for money for food. It hits home as nothing else does, how damn easy you have it – to buy food whenever you want it. Take that ease away and you look around you more and wonder who else is hungry.

– Oatmeal every day is boring. A lot of what I ate during my SNAP week was repetitive, because I quickly discovered that variety is expensive. If you only have a small amount to spend, you’re thinking more of what’s going to last you through the week – which is oatmeal, rice, bread, peanut butter, eggs…to name a few things you can buy pretty cheaply. But then you must eat it. Every. Day. The inspiration for my SNAP challenge, Mayor Cory Booker, bought many more veggies than I did, but I think we ran into similar variety foodblocks, which he mentioned in his blog posts. 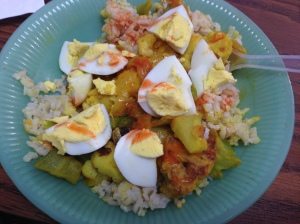 – Being on a budget takes time and planning. I’m sure one gets used to it, but I’m used to picking up food and drink whenever the hunger and thirst thought strikes, which in the city is a few times a day. But with roughly the equivalent of what I spend in a day for the entire week, I had to plot out what I could afford, buy it, and make meals and snacks to take with me when I wouldn’t be home, which often wasn’t until after dinner (squash was still on my plate…pun intended). This meant the kind of forethought that my mother must’ve had when I was a kid and she made and packed everyone’s lunch, as well as shopped for and planned the week’s meals on a budget. Yes, I know mothers (and fathers) like this still exist, but I’m not one.

– I haven’t (and still haven’t) really experienced hunger. But I came closer than I ever have before. And, sorry, but you can’t count how ravenous you are after a long squash game or any active equivalent; you know a juicy burger and a beer (or something equally filling and delicious) is in the not too distant future. The first few days were the hardest as I was out late both nights and should’ve packed more snacks, but then I would’ve been toting a family-size cooler bag with me. So. I was hungry. Not a starving hunger, but definitely a gnawing, empty stomach hunger. And even after I ate (not much), I never felt full.

– Speaking of not feeling full, now I’m often too full. I guess that this has been one of the more personal revelations of a week of not eating so much. I had no idea how much or often I ate until I didn’t eat as much or as often. Once I got through the first few days and stopped worrying that I’d have enough food for the week (a SNAP participant may worry all month), I was able to fix some pretty tasty, well-balanced meals at home. But I was still careful to make everything last, so I ate more slowly than I usually do, served smaller portions, and saved leftovers for lunch the next day. And forget wine, beer, and desserts—all beyond my budget. I didn’t do this for a diet, honest, but if there was one thing I learned about my eating habits, it was that I tend to eat more than I need to.

– On the flip side of that, it was hard to eat a healthy diet on SNAP. Hard, but not impossible. But the fresh fish I eat a few times a week was out, as were many fruits and vegetables. Not that I couldn’t have bought them, but a pb&j is going to keep you going a lot longer than lettuce and apple slices. If I had been on SNAP longer, I might’ve found a way to get more fruits and veggies by economizing on other things, but I did find that frozen veggies were a great alternative. I didn’t have to worry about spoilage, many were on sale, and, as a friend pointed out, they retain their nutrients longer than fresh ones over time. But it was disappointing and sadly not surprising that the most affordable protein was a package of hot dogs and most affordable and convenient carbs were white bread. I may have shopped with a healthy diet in mind, but if you’re trying to keep a family full, then I can see how the cheapest, the biggest, and the tastiest is going to appeal. Unfortunately, that also tends to mean saltiest, fattiest, and full of preservatives. Unless you’re going to grow your own food or walk all over the city looking for good deals (who has the time?) then it’s darn hard to eat a ‘whole food’ diet on a SNAP budget.

– More to the point, though, SNAP does make it easier for families to recover from difficult situations, especially those beyond their control. A spouse loses his job. A home is flooded. A parent takes ill. Some of us have safety nets. Many don’t. SNAP makes it possible to look for a new job, to repair the home, to not have to choose between food and medicine, to have the energy to change one’s life. Because as any athlete knows, you can’t play a good game on an empty stomach. A woman who knows this well wrote a very thoughtful piece on who needs SNAP most: children. I urge you to read it, too: Why We Can’t Ignore the Caveats to Cory Booker’s Food Stamp Challenge.

– Challenge isn’t a bad word after all. It initially sounded too much like a game: The SNAP Challenge. Hence my first post on the subject: SNAP IS NOT A GAME. But more than the challenge to keep to a SNAP food budget for a week, the experience challenged me to think about a subject for more than the time it takes to read a newspaper article…and to read about it, discuss it, and re-act to it. I’ve never thought of myself as an activist, but I’ve also never spent a week actively trying to understand an issue. Admittedly, I was incredibly happy at the end of the week to drink my daily SNAP budget in one cup of luxuriously luscious latte. But I was also glad that I thought twice about it; maybe from now on I’ll put my caffeinated brain to better use….. 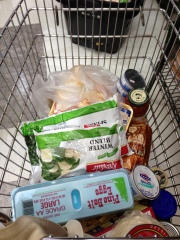 As promised, here’s my annotated shopping list for the week. In full disclosure, when the cashier rang me up, I discovered I had gone over by $4.53, and instead of returning a few items (which would’ve been much more realistic, sorry), I took them out at home.

So the grand total came to $32.96 (minus a few noted items)….at least, I think it does. I’m not a whiz at math, which is how I went over budget to begin with. A few weeks later, when doing my end of year charity donations, I did some more math and added up what I probably spent for food the week before my SNAP challenge. It came to something around ten times my SNAP budget! So I got out my check book and gave the difference to CITY HARVEST. In retrospect, it might’ve been more personal to give a portion to every subway coin cup shaker or to volunteer at a soup kitchen. But I’ll add those ideas to 2013. Unlike most other challenges, the SNAP challenge isn’t one that has an end; it’ll make me think twice for a long long time.

Here’s to a thoughtful and active new year.