When a road beckons… A summer of biking and books

rest STOP in the Catskills

On a recent Saturday morning bike ride in the Catskills, I got to a fork in the road and paused. To the right was the paved country road I had planned to take. It wound up through some very picturesque farmland and at the top of a ridge joined a road that would circle back down through a valley and home. The road to the left was gravel and I couldn’t recall ever taking it before, certainly not with my bike.

A year ago, I stuck to paved roads with a bit of traffic—mostly pickup trucks and SUVs on the way to the next town. It took me a while to feel comfortable on roads where houses were few and far between. But those became the ones I enjoyed the most, where I might spot a few fawns playing in a field, or, once, baby raccoons mewing and as cute as kittens. And then when I started to venture even further, I got a bike that could handle the pavement and the dirt and gravel. I wasn’t going completely off the map, but when a quiet dirt road beckoned, I was ready to accept. 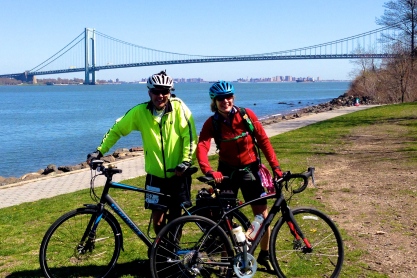 Bro and me in Staten Island

If you’ve checked my FB feed lately, most of the posts have been about cycling. Waking up ungodly early on a Sunday morning to pedal across the Brooklyn Bridge, catch the Staten Island ferry, and then ride fifty miles with my brother over the landfill hills of Staten Island, courtesy of the Transportation Alternatives Bike the Boros ride. Then there I am adjusting a derailleur on my brother’s back patio—something I had absolutely no clue how to do for the first four decades of my life. But thanks to an excellent and surprisingly fun maintenance and repair course at Bicycle Habitat, I finally figured out what cable was connected to what, how to change a tube, and when to lube a chain. Admittedly, my brain works much faster with words than mechanisms, but because biking is something I love, I want to learn how my bike actually works. Also, because I’m letting my wheels roll a little further and further from home this summer, and cell service is a little iffy in the Catskill hills where I ride on the weekends.

I’ve also been reading a lot about bike touring. The idea of getting on a bike and just keep going and going is increasingly appealing to me. I love to travel, to see the countryside unroll, but I’ve always preferred back roads to highways, and while I’ve enjoyed my share of road trips by vehicle, I’m usually communicating more with my co car inhabitant or the radio than anyone along the way. Walking would no doubt be the best way to meet people, but I’ve done the google map math; it takes forever to get anywhere. Plus, you can’t coast down a hill – one of my favorite things to do, after working hard to get to the top of one. But would I enjoy it as much for days on end?  I figured that I’d read what others thought about that.

I sampled quite a few bike travel books on my Kindle, weeding out the ones that felt more like mileage and fuel logs. Not to name names—because I can’t remember them anyway—but I started and stopped the ones that rode from hotel to hotel and restaurant to restaurant. Those adventures seemed way too easy. And if I end up bike touring the same way, I will not bore you with those cushy details.

No, clearly some stress needs to be involved—say, biking through British rain day after day after day, a biking partner who will sleep with you but won’t speak to you, a guy on a horse who doesn’t speak your language but keeps following you—three details from my three favorite books (so far) in this genre.

Mud, Sweat, and Gears: Cycling from Land’s End to John O’Groats (via the Pub) by Ellie Bennett checked off quite a few of my requirements in cycling reading: it was written (and experienced) by a woman; it was often laugh-out-loud funny; what it lacked in landscape (often soaked in rain), it made up for in really good British beer. The number of consecutive days of rain put me off any great desire to buy a ticket for me and my bike to England, but if Ms. Bennett wants to bar hop by bike through some sunnier climes, I raise my gloved hand to accompany her. She sounded like a lot of fun.

Brian Benson, the author of Going Somewhere: A Bicycle Journey Across America seemed more lovelorn than fun. He falls for a beautiful woman just a little out of his league while traveling in Central America and somehow convinces her to bike from his Midwest hometown to the coast of Oregon. He writes well and the lopsided love story kept me reading (okay, I’m a sap, I admit it), but the whole time I’m thinking, Brian, you are too intense for this girl. Get over her already. They have a lot of down and dirty (and sweaty) sex, but I found it distracting when I just wanted to enjoy the gorgeous western scenery. Biking the west is high on my wish list, but hold the spandex romance, please.

There was only a thimble-full of romance in Where the Pavement Ends: One Woman’s Bicycle Trip Through Mongolia, China & Vietnam by Erika Warmbrunn. But it was far and away my favorite of these three—perhaps because it took me so far and away as I was reading it. I’d be subway surfing through the humid bowels of New York City while my mind was bumping along the arid steppes of Mongolia, or crawling out of a tent at night into a bowlful of stars, or watching as all one’s gear and only mode of transportation was being ferried across a river on two tippy logs by two teenage boys. I pretty much knew that Erika would make it to Vietnam, given the title give-away, but I often wasn’t sure if she would make it there on the same bike or with everything intact.

What most mesmerized me most, however, was that this was a woman traveling in countries where she didn’t speak the language, on a bike that she barely knew how to fix, riding places on roads that often didn’t exist—all by herself. And it was not lost on me that the only other cyclists she encountered were men.

What part of her upbringing, what gene for bravery and determination did she possess that enabled her to make this trip? And was mine just buried deeper—under the ‘what is that noise?’, check under the bed twice gene?

Of course, there are clues strewn throughout her story. Her ear for languages helps hugely. A certain tolerance for being thrown into the deep end of a new language and culture (she is fluent in Russian).  A broken family may have made her more independent and resourceful. But Erika makes a point to shrug many of these reasons away. Anticipating a question like mine, she writes, “The only difference between me and you is that I decided to do it, that I thought up the itinerary and got on the plane. Once out there, underway, I didn’t do anything you couldn’t do, too.”

Okay, I’m not buying the ‘only difference’ part. This woman is different with a capital D, and I mean that with capital D deference. But she has a point. I can plan an itinerary. I can get the gear. I can buy the plane ticket. And now I know when a road beckons, I should take it—the next one just may be a lot longer . . . 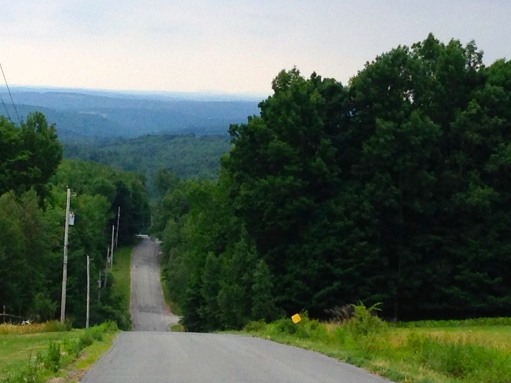 what goes up, must coast down