Nour El Sherbini vs. Latasha Khan in the ToC Quarters

Just when I thought I was starting to burn out on squash for the week, I ran into a friend and squash mate in my work neighborhood this morning (miles from Grand Central). Loved your article, she said, shaking her head full of curly hair. And before I knew it, we were off and running our mouths about yesterday’s matches and who would prevail this evening.

All the talk made me realize that I had neglected to mention in that article two of the players who reached tonight’s women’s quarterfinals: Jaclyn Hawkes (NZL) and Dipika Pallikal (IND). Both had fairly quick matches in the first round, and it can be hard to learn much from a player when they’re not under much pressure. But last night was different….so here are two more take-aways.

1. Take advantage of your opponent’s weaknesses. I know that sounds really really basic, but sometimes us amateurs forget this. Jaclyn Hawkes did not; I’m sure she was aware of Rachael Grinham’s lingering hamstring injury and was very deliberate in moving the ball all around the court, making Grinham stretch a muscle that must’ve been quite painful. Admittedly, I was ignorant of her injury while watching and wondered why Grinham looked so off, especially after covering the court so magnificently the evening before. After losing the first game to Hawkes by a wide margin of 11-3, Grinham turned up the deliberacy and power of her swing, trying to force Hawkes into a more defensive position, but Hawkes’ long reach and steady clean hits ultimately undid that plan, and Grinham went down in three. 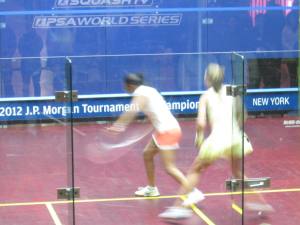 2. Can’t take your opponent down in three? Or four? Gut it out to five. This is what Dipika Pallikal had to do. After taking the first two games with her hard and fast style of play, she slipped in the third and fourth games, putting too many of her shots into the tin. Both players rose to the occasion in the fifth, going for absolutely everything and a few of their points were not dissimilar from those I had seen in the men’s matches, with hard cross courts, repeated corner drops, and racquets flying faster than I’d seen all night amongst the women. Super fast reflexes were a key part of this game and all the fatigue I felt earlier in the evening disappeared. It made me wish that the women played like this much more of the time. Pallikal and Urquhart were close in points all the way through the game, and Pallikal hammered the ball low down the right wall (Urquhart’s backhand) to bring it to nine all. Soon after, Urquhart dashed past Pallikal mid-court toward the right wall, swinging at the ball, but crashing to the floor almost simultaneously. Her hand sprung up in an L, calling for let and the ref gave it to her. Pallikal looked astonished. Watching the video replay, I still didn’t see any impact between the two players, but at this time of night, I didn’t trust my own eyes. and the three refs seemed certain that there was an obstruction. To be fair, Urquhart looked pretty dazed herself.

So it was nine all again and it’s testament to Pallikal’s professionalism that she shook the call off and hit a beautiful passing cross court for 10-9. And just a few shots later, hit a deep backhand that Urquhart winds up to get, but the ball doesn’t come up. A dead on nick that made everyone gasp.

I’ve been thinking today whom I’d like to see lined up for the women’s finals. Pallikal faces another long-legged blonde in Jaclyn Hawkes. If Pallikal isn’t tired out from five games and her drops and nicks are on then I think she has more of an arsenal to pull out a win. But Hawkes is a very steady, safe player and she may force Pallikal into more risks.

As for Nour El Sherbini and Natalie Grinham, I’d love to see this composed young Egyptian up against a hard hitter like Pallikal. I think they’d give us the more exciting match. But Natalie Grinham is a small but incredibly strong force to be reckoned with. She may refuse to let the sixteen year old get through.

We’ll see though in just about an hour. The women’s matches are on at 6 p.m. and 8:45(ish), straddling the men’s semis. Come watch from the front wall, if you don’t have tickets!