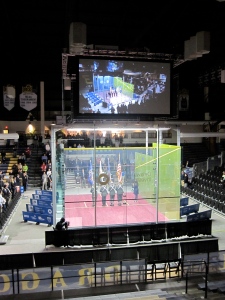 In case it’s not clear from the photo, I’m at the Delaware Investments U.S. Squash Championships Finals. Now. At 6:25 p.m. on Thursday evening. I’ve never blogged live before —  but for a change I’ve got my computer in front of me and a sweet seat overlooking the full front of the court.  First up is the women’s finals: England’s Laura Massaro (World #5) vs. Australia’s Kasey Brown (World #6).  Massaro took the semi match from World #2 Jenny Duncalf. And Kasey Brown, after her already famous upset match beating #1 Nicol David in the quarters, overcame #3 Madeline Perry in their semi final match.

Right now, they’re warming up on the court. I’m a woman, so indulge me observing their fashion statements for the finals. Massaro is in a hot pink skirt and white tank with plaid accents. And Brown is in her signature racerback dress – this one black with a shiny silver design from below the bust down. Okay, that’s it; I’ll do the same for the men later; I’m sure you’re dying to know….!

And the match begins.

Game 1
First point to Massaro – very quickly. Both are right handed. So a lot of left wall rails and then a bunch of cross courts. Massaro tins a cross. One all. Okay, I won’t bore you with every point… These women look remarkably alike with their blond ponytails, athletic builds, and similar heights (5′ 10ish?). I walked by Massaro in the hall as I came in and she looked just a bit taller than me (at 5’8″).  Brown is already at 6-2, so I’m wondering if this is going to be a rout….but maybe not, Massaro brings it to 3-6 as I type that. Then 4-6. Forget that. But regardless, Brown’s shots just look crisper to me, and more accurate; she has very effective volley drops. Like just now, there’s one into the right corner. Nice. And she follows that point with another drop and then a low cross court that Massaro can’t return. It’s now 9-4 Brown. There’s a close-up of Massaro on the big screen and she looks slightly stunned. Well, at 10-4, I don’t blame her. At 5-10, there’s a weird gonging sound after the ball hits high (but in) on the front wall and the ref calls a let – because it’s distracting? Soon after, Brown hits a low, hard shot down the left wall for the first game. I’m beginning to think that I saw the best matches when I was here over the weekend. Come on Massaro!

Game 2 (1-0 Brown)
Massaro gets the first point–yeah. And the second with a tin by Brown. But that’s what I’m talking about, Massaro’s mis-hitting much more than Brown; a lot of shots are going into the middle and Brown puts away one for 1-2. Would Massaro have been able to beat Joelle King who gave David such a tough match at the beginning of the tournament? I’m not so sure…. Then again, she’s now up 5-2 in this game. And there are a lot of lets in this game; they barely have to ask for them. Brown gets another neat low left corner drop to bring it to 5-7. But Massaro is forcing a number of errors and now it’s 9-5 Massaro. And then 10-5 with a front right drop. 11-5! Okay, call me very wrong. Or my cheering worked?

Game 3 (1-1)  in which I try to pay better attention and not look so much at my keyboard….. Okay, Massaro does look more relaxed. And controlling the T. Despite that, Brown gets the first point with her amazingly fast reflexes. Some of her shots now, though, are coming into the middle and Massaro is taking advantage of that. At 3-1, 4-1, 5-1, 6-1, 7-1, 8-1, 9-1 – wow – the tide is definitely turning in Massaro’s favor. A lonnnnng point now to 10-1 where Brown is cutting almost everything off, but finally can’t get her racquet on a deep low cross court. She gets another 2 points after that, but Massaro wraps it up at 11-3. Wow.

Game 4 (2-1 Massaro)
Massaro comes out first and is looking extremely confidant as she waits for Brown to return. The game begins with a let. And another. Then the first point goes to Massaro after a nice cross court. But she hits it out of court on the next rally for 1-1. Now 3-2 Massaro after another out of court by Brown. And then a cross court drop by Massaro to bring it to 4-2. A long point at 3-5 and Massaro finally outwits Brown to bring it to 6-3, then 7-3. Amazing how confidant Massaro looks now. And cool. And relaxed. As if she’s just waiting  for Brown to make the mistakes, moving her around the court. A review is asked for by Brown on a ‘no let’ call where she tries to go through Massaro. “No Let” is upheld. Huh. I would’ve called it the other way. Guess that’s why I’m not a ref. 8-4 Massaro. 9-4 Massaro after Brown tins. She’s gotten tight, or tired, or both. Too much tinning; I’m sure she’s not happy with herself. 10-4.  Match ball. But Brown hits a clean low left rail for 5-10. Last point is made on a lovely low boast that doesn’t come up and it gets the match. Laura Massaro is the new women’s U.S. Open Champion!

next up…the men in just a few minutes….Nick Matthew vs. Amr Shabana; they meet again.